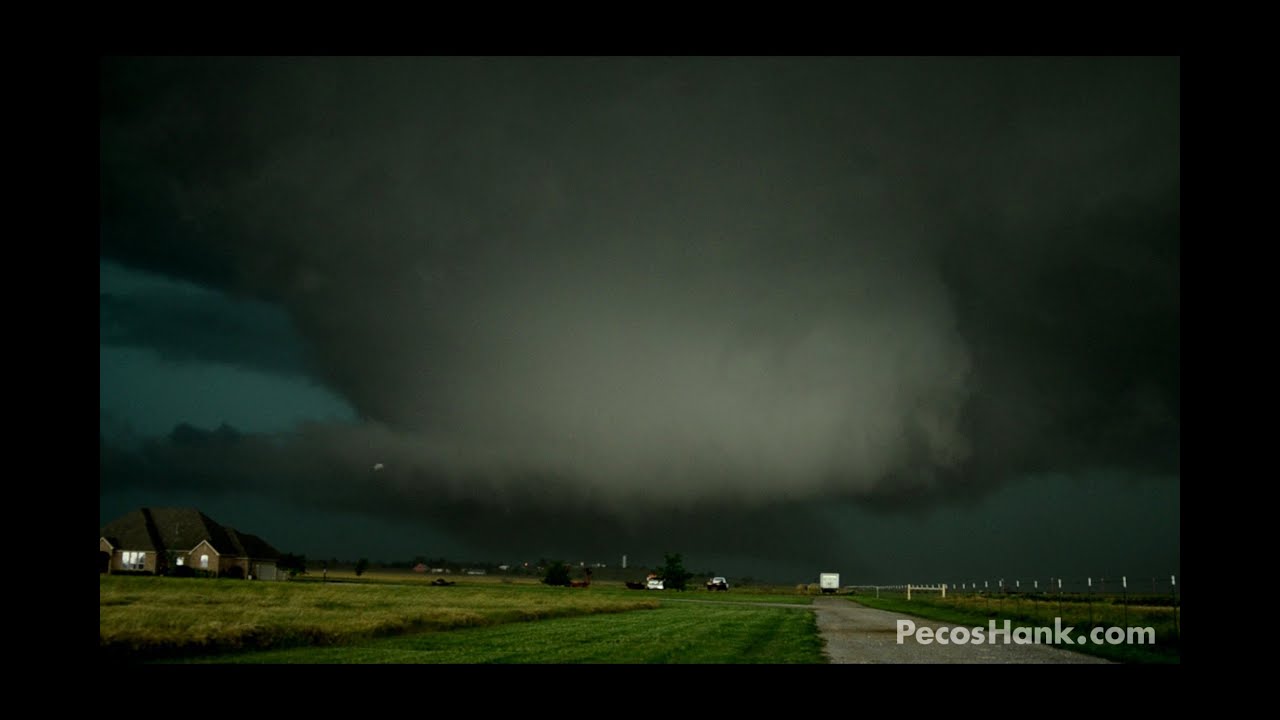 At 2.6 Miles wide, this is the largest Tornado ever recorded. Touchdown was near El Reno Oklahoma on 5-31-13. This tornado was very deceptive to many due to its appearance and size. The bulk of what you are seeing at 2:50 is a large wedge tornado. When the base lifts and flattens at around 3:05 it gave the “tornado” a mesocyclone appearance and when it started dropping large sub-vorticies many chasers lost sight of the big picture. At around 6:02, the tornado is taking up almost the entire frame, however the huge sub-vorticies to the lower right appear to be the only point of ground rotation. What many thought were several tornadoes was in fact just 1. At time code 6:30, this is a separate, smaller anticyclonic tornado.

DECEIVING IN APPEARANCE:
This 2.6 mile wide tornado received an EF3 rating… There is an intermediate circulation between a mesocyclone and a tornado called a “tornado cyclone.” Often the lines between these features are blurry. When this tornado first touched down it took on a classic wedge shape, but then the bottom truncated or flattened out and the wedge transitioned to a tornado cyclone. Under the tornado cyclone if you look closer you’ll see a brief smaller tornado or two touch down.. these are suction vortices. Underneath this flat truncated tornado cyclone, almost invisible winds are causing damage on a the scale of a weak tornado. Therefore, the entire area underneath the tornado cyclone is by definition a tornado. The majority of this tornado was only causing EF1 damage, however the highly powerful suction vortices packed winds well over that required to cause EF5 damage… except these most powerful winds never hit any structures to cause the damage or indicators to warrant giving this tornado an EF5. The thing to realize is that tornadoes by definition are not always condensed with clearly visible borders. When I was retreating the circulating winds were blowing the lighter back of my car out from under me. Other storm chasers got rolled, others took direct hits.

CORRECTION: The SPC does not give Tornado warnings.
To License contact [email protected]

EXPLANATION….
We are all aware of the risks chasing tornadoes. The surprising thing to us was that none of us had been killed yet, and even more surprising was that when it finally happened it happened to Tim Samaras, his son Paul and Carl Young.

Earlier that day the Storm Prediction Center gave the public a “Loaded Gun” warning for Oklahoma City and surrounding area. Unfortunately this also tells everyone in OKC where there’s an excellent chance of seeing a destructive tornado. The streets and back roads were packed with cars and trucks, half evacuating, half racing in. People were hollering, cursing, crashing into each other, panicking, and blocking passage. Horns, sirens, thunder and the gushing sound of a tornado barreling down. At first the storm was moving relatively slow in an Easterly direction. 2 or 3 miles to the South was the Canadian River where most of the backroads / escape routes ended. Straight ahead were several easterly roads heading to OKC. When the tornado materialized i was driving next to it with several other chasers about 25 mph as it inched closer and closer. When it was close enough i hit the gas planning to outrun it. The tornado’s radius was growing, accelerating and getting closer…. I could only go so fast due to the traffic in front of me and the tornado was gaining ground. I slammed on the breaks flipped the car around, blasted west and had to drive closer to an EF-5 than i ever want to again… looking at my maps i could see the chasers might be outrun. Then the tornado made a hard left turn to the Northeast and grew to 2.6 miles wide in diameter.

If i had to speculate I’d say something random happened to Tim. Somebody ran him off the road or crashed into his vehicle… or some kind of vehicle failure… Tire blow out or windshield gave way… He knew tornadoes tendency to deviate. We may never know, but i’m convinced something else went wrong. Regardless, They died doing what they loved doing and if it happens to me… if i start choking on a peanut while running from a tornado know this… it was worth every second. I love chasing tornadoes and i love cracker jack. My condolences to Tim, Paul and Carl’s family and all the other victims of this day. I was looking forward to Tim’s lightning research.
-h

MUSIC:
Clips from a few Southern Backtones songs were used namely…
“Monster show”
“Lanugo”
“Little Ghost”
And a clip from Two Star Symphony “Something She Said”